It was the beginning of March. The corona virus was wreaking havoc abroad, but here it seemed to be something only over-zealous HR policymakers were worrying about. Then, on the twelfth, we received the shock announcement that we would have to work from home until the end of the month. Three days later, the schools were closed for three weeks. Everyone I knew was counting down the days until we could get back to normal. Three weeks seemed like a long time.

On the seventh of April, a bombshell hit. During his press conference, the Dutch prime minister used two new phrases, ‘the new normal’ and ‘the 1.5m society’.  My jaw dropped as my heart froze – surely it was impossible that this situation could become permanent? I could not believe in ‘the new normal’. Four months on, I’ve been forced to accept that many things I would have found bizarre back then, now indeed seem to have become normal. This series of blog posts will look at various aspects of the ‘new normal’ as I experience it in the Netherlands. This post: following the rules

On 1st August 2019, a controversial law was passed in the Netherlands. This forbade covering your face in certain places, including while on public transport. One year on, and the law has been turned on its head. You are now explicitly required to cover your face while on public transport, by wearing a mask. Since the start of the corona crisis, our lives have been turned upside down by a deluge of new guidelines and rules. What amazed me was how easily these new restrictions were accepted, despite being so drastic.

In the Netherlands, I’ve been used to proposed changes in the law being endlessly and furiously debated. The above-mentioned ‘burkha law’ banning face coverings was hotly contested, which is understandable given its implications for cultural and religious freedom. But even changes that are seemingly more minor can be very contentious, such as restricting the use of fireworks or increasing – or reducing – the speed limit. Nor are these sort of discussions usually suppressed – the Dutch are famous for their ‘polder model’ of policy making which seeks consensus rather than the victory of one side over another, and which seeps through to most aspects of Dutch life. Dutch people are also not generally keen on being told what to do. More than once a colleague has complained bitterly to me about their boss pulling rank on them – a good Dutch boss should convince their employees, not rely on ‘I’m the boss – do it because I say so’.

It was therefore very strange, in March this year, to see the new corona rules accepted without even a murmur. Employees quietly retreated to their homes and converted them into makeshift offices, parents took on the additional role of teacher, nights out became nights in. Events were cancelled, shops closed, restaurants switched to takeaway service.

Far from the new rules being debated, people turned all their efforts to complying with them. Almost overnight a new industry sprang up to facilitate this. Supermarkets sprouted plexiglass screens, hand-gel dispensers popped out of the ground all over the place, and miles of tape appeared on floors to indicate routes, one-way systems and distances. Every place of business that was still open acquired a large poster next to its door, listing their own flavour of the rules. Instead of an item of protective equipment, you would have been forgiven for thinking that masks were this summer’s fashion accessory. They quickly became available in all colours and patterns, and it didn’t take long for adverts to be modified to include models wearing masks, concentrating their allure in a sultry gaze.

Negotiating this maze of rules is complicated. Firstly, because the rules themselves are complicated. At first sight, they seem simple – keep your distance, stay home if ill, cough or sneeze in your elbow. But the devil is always in the details, and soon a jungle of caveats and exceptions developed. The rules depended on whether you were in the same household, what your age was, if you had medical conditions, where you were, even what activity you were undertaking. Inevitably loopholes and contradictions arose, sometimes leading to unintentionally humorous situations, such as the group of teenagers hanging around a playground who instantly launched into an aerobics routine upon spotting an officer coming to admonish them – because doing sport in a group is allowed, while just being together is not.

Secondly, how the rules are put into practice is complicated. Every shop, office building and sports centre is different, so inevitably they all have a different set of procedures. While the supermarket asks you to disinfect your trolley when you take it out of the rack, the library asks you to disinfect your basket when you are finished. The leisure centre where my daughters go for swimming lessons had a carefully laid out route that took you past the till, through the changing rooms where you could kiss your offspring goodbye, and then back out of the door. Unfortunately, they didn’t take into account that their corona policy also insisted that you arrive no more than five minutes beforehand, which meant that parents needed to pay afterwards – and so go round the whole loop again, doubling their contact time. Bike crossings are a nightmare, as attempting to keep 1.5m distance from the other waiting cyclists inevitably puts you in the way of passing cyclists on the other bike path, or pedestrians. Do you choose risking corona, or risking a collision?

Thirdly, how the rules are interpreted varies wildly. From the hairdresser who asks you a few health questions and then carries on as normal, to the café owner who takes your order from shouting distance and then leaves it on a separate table for you to go and pick up yourself. From the people who interpreted the order to ‘stay home as much as possible’ as permitting a daily walk, to those who didn’t leave home at all for weeks on end. The different camps emerged quite early on in the crisis and do heated battle on social media, the high stakes involved leading to a vitriolic moral debate. Nor are the differences in opinion confined to the general public. There are serious variations in how various authorities interpret – and enforce – the rules, which have even led some Dutch lawyers to encourage people to launch a legal challenge to fines received for breaking the corona rules.

Inevitably, the confusing – and in some cases impractical – nature of the rules has led to compliance slowly eroding. Face masks become mouth masks, then chin masks – or worse, migrate all the way to the elbow, the wrist, or dangle from the hand in an ‘it’s ok, look, I have a mask’ sort of way. Not to mention the totally useless substitutes – a glove held in front of the face, a crocheted mask or even a coffee filter with two whopping holes punched in it for the woolly straps. The hand gel gets skipped, people move in closer for a conversation and invite each other over for coffee. The prime minister wags his finger in paternal admonishment during his press conferences, but the moral high ground is getting shakier given the justice minister and the royal couple both openly broke the 1.5m distance rule in recent days. 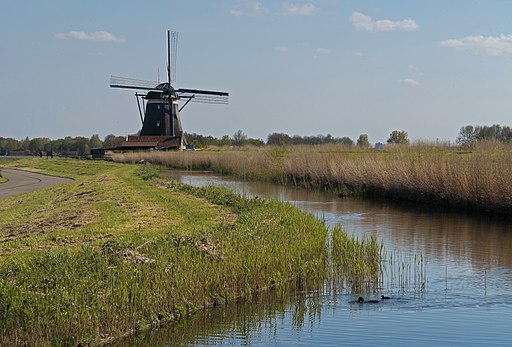 This, strange as it may seem, is all actually very Dutch. The prevailing philosophy often seems to be that rules should be complex and confusing, as that avoids the need to punish people for breaking them, which is not ‘gezellig’. And in any case, we are all grown-ups who are capable of determining how to behave, right? The rules governing where bikes and mopeds are allowed to ride are so complex that my partner and I regularly have disagreements with moped riders while out cycling, with both us and the moped rider being completely convinced we are in the right. A well-known Dutch traffic engineer actually designed roads on the principle that it should not be clear which part of the road is for pedestrians and which for motor vehicles, ‘to encourage each person to negotiate their movement directly with others’. In the more than ten years that I have lived in the Netherlands, the restrictions on fireworks at New Year have been steadily tightened, yet every year I see groups of youths setting off fireworks illegally with impunity – the rules can be as strict as you like, but it’s totally academic if they aren’t enforced. For soft drugs, it is even official policy to not enforce the law. In general, you often hear of Dutch police issuing warnings rather than fines for minor offences, which seems to be the pattern with the corona rules too.

Even back in March, when the general public were quite content to support the corona restrictions, experts were voicing their concerns about the risks posed to democracy and the rule of law. More recently, the legal basis of the face mask requirement was challenged. Public demonstrations against the restrictions have taken place, so far mostly regarded as being the work of an extreme minority. Yet even in the mainstream there is a growing number of questions being voiced, in private – for now.

To sum up, we now have the situation of confusing rules that are not enforced, increasingly not obeyed, and subjected to public debate. It sounds to me like the old normal is back in the Netherlands.