In 2000, the artist Marco Evaristti exhibited an artwork consisting of live goldfish in blenders. Visitors were free to press the button to switch the blenders on, if they chose. Of course, the inevitable happened, and someone pressed the button, killing the fish. The museum director was convicted of animal cruelty, but his conviction was later overturned, as the fish had probably died almost instantly, and not suffered. Most likely, they lived quite happily in their blender up until that fatal moment, totally unaware of any danger. I used to be like those fish – that is, until corona turned up.

Hollywood specializes in clear endings. Logical, when you have to attract people to cinemas, keep them enthralled, and then boot them out again two hours later, happily sated, so that the next group can go in. While it’s not the norm anymore to finish with ‘The End’ in giant letters, it is still pretty much […] 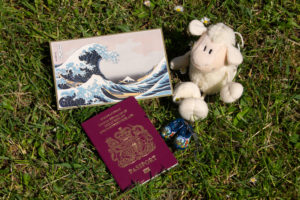 The author of ‘The Quiet Wave’ lives in The Netherlands with her partner and two young children. This blog takes an honest and open look at a whole range of experiences, from parenthood, to living abroad, to going through a mid-life crisis.  To find out more, look in the About category.